Seven years after attending my first FOSSAsia in Ho Chi Min City, I was able to join again this year! The difference is amazing - the conference has grown to be one of the largest open source events in Asia, with more than 200 speakers over three days across 13 tracks and now hosted in Singapore.

The conference is entirely open source and volunteer-run, which is really neat. Kudos to the organizers for putting it on, which is a huge amount of work. The focus on free and open source software and tracks on relevant topics like AI, Bitcoin, and IoT combine to make a great collection of people to put in one place for a weekend.

Mozilla didn't directly sponsor this year, but instead sent some of our Tech Speakers who had talks accepted and myself. We were seven people from six countries, speaking about VR, WebAssembly, Web-RTC, security, IoT, AR and more. Big thanks to Bob Reyes, Diky Arga Anggara, Noritada Shimizu, Santosh Viswanatham, Shah Mijanur Rahman and Trishul Goel for speaking at the conference and putting in a bunch of hours at our table every day.

The number of speakers was enough of a presence to earn us a table in the exhibition hall, so we took advantage of the opportunity and demo'd A-Frame VR and AR on mobile devices for all three days.

The response was fantastic - lots of people having their first VR experience of any kind, and everyone was mindblown that the demos were built using web technologies, running in a browser, and on a mobile phone. 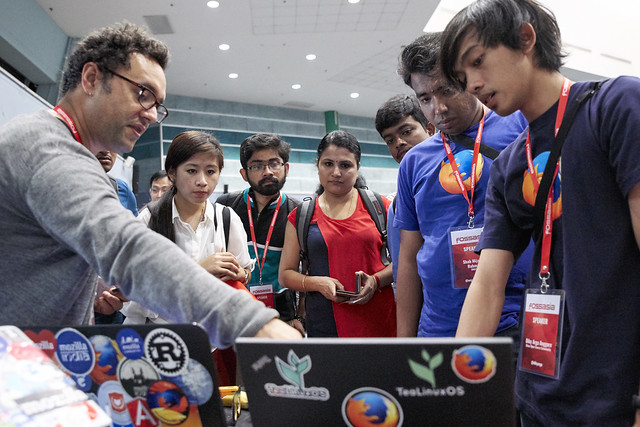 After three days of rapping with everyone who came by the booth, here are a few impressions:

Huge thanks to Engineers.sg, who recorded almost all of talks. The complete set of FOSSAsia 2017 recorded talks is here on their website.